Film / Flesh and the Devil 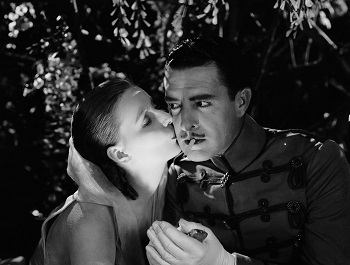 Flesh and the Devil is a 1926 silent drama film starring John Gilbert, then at the height of his fame, and a Swedish actress new to America named Greta Garbo.

Leo (Gilbert) and Ulrich (Lars Hanson) are childhood friends and soldiers in the Kaiser's army. Gilbert falls in love with the exotic, mysterious Felicitas (Garbo) only to find out that she's a married woman. When her husband discovers the affair events take a tragic turn and the Army ships Leo out to Africa. He comes back to find out that Felicitas has married Ulrich.

Flesh and the Devil was a huge hit and a milestone in the careers of both Garbo—this was her Star-Making Role in America—and director Clarence Brown. It was inducted into the National Film Registry in 2006.