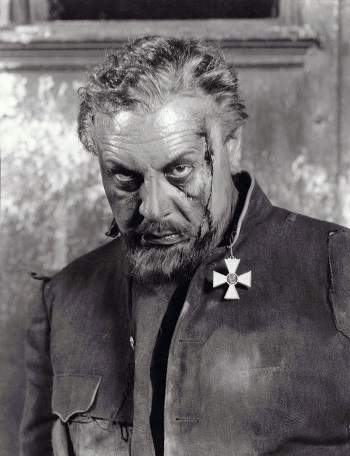 The Last Command is a 1928 film directed by Josef von Sternberg, starring Emil Jannings, William Powell, and Evelyn Brent. A Hollywood film director, Leo Andreyev (Powell) is looking for suitable extras to put in his film about the Russian Revolution. He spots the headshot for one Sergius Alexander (Jannings), a man who claims to have been a Russian general, and decides to hire him. Sergius is a broken man, living in a tiny room and eking out a living by working as a film extra for $7.50 a day. And if that weren't bad enough, he has a persistent head twitch which he explains by saying "I had a great shock once!".

As Sergius puts on his makeup the film flashes back to 1917, pre-revolution. It turns out Sergius really was a general, and not only that, but also a Romanov Grand Duke and cousin to the Tsar. Military police in Sergius's army identify two actors, Leo Andreyev and his companion Natalie (Brent), as known subversives. Sergius has them brought in for questioning. After Leo insults him, Sergius has him thrown in jail, but Sergius decides to keep Natalie with him as a companion and mistress. Leo rots in a cell while Natalie is drawn against her will to the dynamic Sergius—but Red October soon turns everything upside down.

This film, coming on the heels of the very successful gangster flick Underworld, established von Sternberg as one of the hottest young directors in Hollywood, but he would soon go back to Germany to make The Blue Angel with Jannings and Marlene Dietrich. Jannings won the first Academy Award for Best Actor for his work in this film and The Way of All Flesh, but he soon had to go back to Germany as well due to his heavy accent. After The Blue Angel, Jannings would spend the rest of his career making movies for the Nazis. The Last Command also helped launch William Powell onto the Hollywood A-list. Of the six movies that Jannings made in Hollywood, this is the only one that has survived.