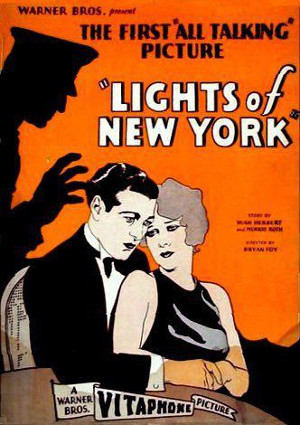 "This is a story of Main Street and Broadway — a story that might have been torn out of last night's newspaper"
Advertisement:

Lights of New York is a 1928 talkie — the first full-length movie to feature a completely synchronized dialogue. It was the debut film by Brian Foy, who later became the head of the B-unit at the Warner Brothers and proceeded to turn out over 20 movies each year for next two decades, earning the nickname "Keeper of the B's". The movie was shot in just eight days, on a $23,000 budget, and grossed over $1,200,000 despite being torn into pieces by critics. The title of the first all-talking movie was an attraction big enough not to worry about quality.

The story itself is a crime drama. Two bootleggers, hiding in Upstate New York, plan to return to Broadway. They convince a young guy Eddy and his friend, the local barber, to join them and open a barber shop in New York. Too late Eddy finds out that their business is just a front for an illegal booze store. Eddy is in love with a girl from his town, Kitty, who had moved to New York before him and now performs at a night club, owned by a gangster named Hawk who controls the bootlegging business behind the barber shop. Hawk makes advances towards Kitty, dismissing his old-time mistress Molly.

During a bootlegging raid, a policeman is killed, and Hawk decides to frame Eddy for it. Kitty overhears and warns Eddie. When Hawk arrives to the barber shop, Eddie confronts him, Hawk pulls a gun, but someone shoots him from behind the door and runs. Before they can dispose of the body, the police arrives, so they disguise it as a sleeping customer. Eddy runs while the barber tries to fool the policemen, but they find the corpse and he tells him everything he knows.

Eddie and Kitty are preparing to flee the town, but police detectives come after them, accusing Eddie of murder. Before he's arrested, Molly arrives and confesses that it was her who killed Hawk for dumping her (it's strongly implied she's taking Kitty's blame, though it's left ambiguous), and that it was Hawk who killed the policeman. The detective arrests her and advises Eddie and Kitty to leave the city, which they do.

Lights of New York provides examples of the following tropes: