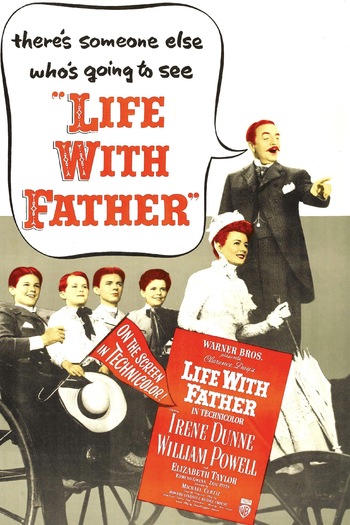 Miss Wiggins: Sir, before I can let any girl go from this establishment, I must know the character of the home in which she will be employed.
Clarence Day Sr.: Madam, I am the character of my home.
Advertisement:

Life with Father is a 1947 comedy film directed by Michael Curtiz, starring William Powell and Irene Dunne. It was adapted from the 1939 hit play of the same name, which was based in turn on the real Clarence Day's memoirs of growing up with his bombastic father in 1880s New York City.

Clarence Day Sr. (Powell) is a Wall Street stockbroker, married to the lively but slightly scatterbrained Vinnie (Dunne). They live on Madison Avenue with their four sons, who range from the college-age Clarence Jr. to five-year-old Harlan. Although Clarence Sr. strives to keep his household as neatly ordered as his office, the activities of his family frequently thwart him in this goal. Though affluent, he insists on keeping a tight budget (taxicabs and charge accounts both come in as objects of his ire), while Vinnie sees nothing wrong with spending some of the money they have on dining out and pretty decorations.

The plot follows the typical ridiculous doings of the Day family, from Clarence Sr.'s outrage over the visit of Vinnie's cousin and her young friend Mary, John's dodgy job selling "medicine," and Whitney's attempts to learn his catechism. The latter half of the film follows Vinnie falling ill and her husband's reaction to it, and her reaction to his dismissal of baptism.

Due to a clerical error, the film entered the Public Domain in 1975.

What the Church is For

Mr. Day doesn't go to a preacher to be preached at

What the Church is For

Mr. Day doesn't go to a preacher to be preached at