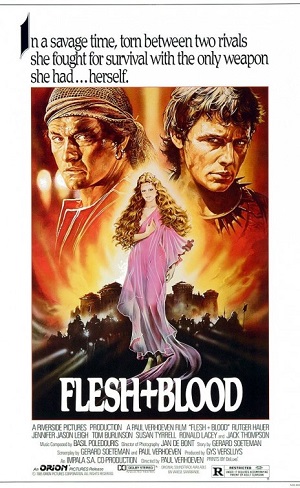 Flesh+Blood is a 1985 dramatic adventure film directed by Paul Verhoeven, set in The Renaissance (in Italy, it seems) though the themes are more typical of The Middle Ages and often is called a medieval drama. The first American movie from Dutch director Verhoeven, it stars Rutger Hauer and Jennifer Jason Leigh. Basil Poledouris composed the soundtrack.

The movie centers around a gang of mercenaries and thieves lead by Martin (Hauer), who find themselves in an Army of Thieves and Whores, which their noble employer refuses to pay after having used them to regain a city. The ungrateful nobleman is Arnolfini, whose son Steven is a dorky but attractive young man who is interested more in learning than fighting and whoring, unlike most of the people he hangs out with. His father has arranged his marriage with a beautiful, highborn, and virgin young girl named Agnes (Leigh), but Steven is not interested at all until, y'know, he sees her. Agnes is beautiful and very interested in learning how seduce men and enjoy love. While they are enjoying their blossoming romance, they are caught by Martin's gang, who start a fight with Arnolfini's men and rob them. Agnes founds herself unfortunately hidden in the gang's chariot, and when they discover her, she's raped by Martin who's manipulated by Agnes in falling and caring for her (though the attraction is somewhat mutual) and so he wants to keep her to himself. Steven does not give up and tries to regain his girlfriend storming the castle where she hides in, while we don't know how much exactly Agnes is manipulating Martin to stay alive until the very end.