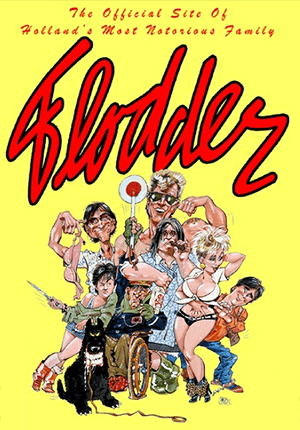 Flodder is a Dutch media franchise created by Dick Maas (director of Amsterdamned and De Lift), consisting of 3 movies and a television series. The franchise started with the movie Flodder from 1986. A second movie called Flodder in Amerika! followed in 1992. The TV series was broadcasted from 1993 to 1998 with a total of 5 seasons. The third movie, simply called Flodder 3, was released in 1995. This movie was supposed to be the grand finale for the series and the franchise as a whole, but the series continued for two more seasons afterwards.

The franchise is about the eponymous antisocial family Flodder. The family consists of Mother Flodder (real name Geertruida), her five children (ranging in age from mid 20’s to preteens; all of which have a different father), grandpa, and their dog Whiskey. Another recurring character in the franchise is social worker Jacques “Sjakie” van Kooten. When the Flodder family is forced to leave their old home because it turns out it was located on top of a former waste dump, Sjakie convinces the city council to give the family a home in a highly respected upper class neighborhood called Zonnedael (sunny dale). The idea behind this is that this change of social environment will inspire the family to become model citizens. The project however turns out to be a big failure, because the family doesn’t adapt at all and continues with their illegal or otherwise antisocial activities. Mother makes her own whiskey, Johnnie and Kees (the two oldest sons) both handle in stolen goods, the oldest daughter, also named Kees, constantly hangs out with wrong boyfriends, and Toet and Henkie (the youngest son and daughter) are juvenile delinquents. The families behavior causes a lot of friction between them and the rich snobs in Zonnedael. Only Sjakie remains convinced of the family’s good nature and keeps protecting them.

The first movie shows the Flodders moving into Zonnedael. At the end of the movie, a retired colonel angrily destroys the Flodders' home with his tank. In the second movie, the city council signs the Flodders up for an exchange program to have them send off to America for a year. The third movie focuses on the upcoming 25th anniversary of Zonnedael and the attempts of the inhabitants to get rid of the Flodders before the scheduled festivities. All attempts backfire however and in the end the entire neighborhood is destroyed except for the home of the Flodder family.