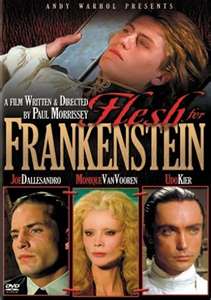 Flesh For Frankenstein is a 1973 horror movie that was filmed alongside its companion piece Blood for Dracula, which was released the following year. Both films were written and directed by Paul Morrissey, a frequent collaborator of Andy Warhol who allowed his name to be attached to their alternate titles but otherwise had nothing to do with them. The films also starred Joe Dallesandro, another Warhol collaborator, and Udo Kier. Both films dealt with themes of sexuality, classism, and immortality in a tongue-in-cheek manner, using classic horror figures of the 19th century. In this case, Frankenstein.

The movie concerns Baron Frankenstein (Kier) who lives in Serbia with his sister/wife and two children. As with other versions of the character, he is a Mad Scientist. This particular version wishes to create a Master Race using body parts stolen from corpses. He creates a female body but needs a male, preferably one who has a massive libido and sexual stamina so that they can produce offspring. He scopes out the local brothel for just the right man and mistakes the ambiguously gay Sacha as the perfect lover. He and his assistant Otto kill Sacha and use his brain as the mind of the male monster. His friend Nicholas the stable boy, works for the Frankensteins but does not fully realize Sacha's true fate, only seeing his dead body and left with several questions. Meanwhile, the Baroness begins seducing him after she catches him having sex with fellow workers.

Before long, everything goes nuts and most of the cast die.