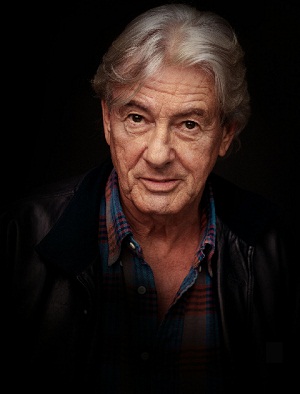 "I had become a film director because I thought I could express something in an artful way."
Advertisement:

Paul Verhoeven (born 18 July 1938 in Amsterdam) is a Dutch film director, probably best known for his international works made in the United States.

He is often regarded as one of the best film directors in The Netherlands, and certainly one of the most notable—having won various Golden Calves (the highest award in the national film award ceremony) for his contributions to Dutch cinema. He was a frequent collaborator of the late Dutch actor Rutger Hauer.

Verhoeven was born before the onset of World War II and the Nazi occupation of the Netherlands, which shaped his outlook on life. After completing the film academy, he started out small in the film community before moving on to full-length features. In the 1970s he cooperated with producer Rob Houwer on several highly acclaimed Dutch movies such as the erotic/romantic drama Turks Fruit (Turkish Delight) and the World War II epic Soldaat van Oranje (Soldier of Orange).

In the 1980s he branched out into making English-language films, starting with Flesh+Blood (1985). Since then he has became best known to American audiences for his sci-fi action films, although he admits not being a fan of the genre. He became attached to direct the script for the first RoboCop (1987) movie after initially rejecting it. His wife eventually convinced him that there was more to the story than he initially thought (drawing parallels to Jesus Christ's death and resurrection), and he liked the extreme violence. The film proved a major hit that helped jumpstart the Super Hero film genre, while it was hailed as a brilliant Black Comedy satire of 1980s America.

This was followed up three years later by Total Recall (1990), an adaptation of noted sci-fi author Philip K. Dick's story We Can Remember It For You Wholesale about a man who finds out his life is a lie and heads to Mars to learn the truth, with Arnold Schwarzenegger in the main role.

His work on the 1992 erotic thriller Basic Instinct reunited him with Total Recall's Sharon Stone, and started a short period of working with screenwriter Joe Ezterhas. The film was partially a remake of his 1983 Dutch movie De Vierde Man (The Fourth Man), and was controversial in the States, with feminist and gay rights groups protesting against the film's alleged misogyny and homophobia, which puzzled Verhoeven. His career reached a low point in 1995 with the widely panned Showgirls, for which he won a Razzie for Worst Director. Showing that he's not a sore loser, Verhoeven collected the award in person, becoming the first director to do so. He claimed to have had more fun at the award ceremony than reading the reviews.

Verhoeven's last two American films, 1997's Starship Troopers and 2000's Hollow Man received mixed receptions. Fans of the Robert A. Heinlein novel considered the movie a betrayal of the source materialnote Which was totally intentional in Verhoeven's part. He completely disliked the book, because its militaristic and jingoistic overtones reminded him of the Nazi occupation of his country when he was young., while others appreciated it either as a straight-up action movie or for the Stealth Parody it aimed to be.

His next cinematic effort in 2006 returned Verhoeven to his Dutch roots, to direct the World War II thriller Zwartboek (Black Book). It offers a morally grey account of the Dutch resistance during the last year of the war, with Carice Van Houten as an undercover Jew involved in the anti-German resistance. His 2016 film Elle was his first film in the French language and told the story of Michèle (Isabelle Huppert), a French businesswoman who is raped in her home and who stalks her attacker. By far the most critically acclaimed film of Verhoeven's career, it got a seven-minute standing ovation at Cannes (and was nominated for the Palme d'Or), is the French entry for the Best Foreign Language film at the 2017 Oscars, and has earned a bunch of awards, most of them for star Isabelle Huppert, who is a huge Verhoeven fan.

This director's work provides examples of: