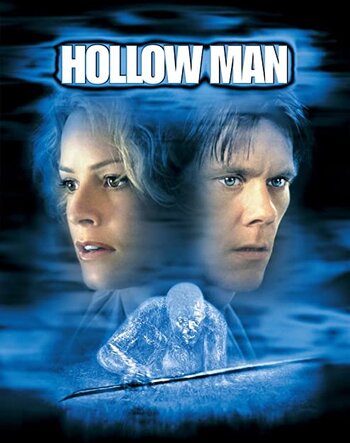 "You know what, Matt? It's amazing what you can do when you don't have to look at yourself in the mirror anymore."
— Sebastian Caine
Advertisement:

Hollow Man is a 2000 Science Fiction thriller film directed by Paul Verhoeven, inspired by H. G. Wells' The Invisible Man. It stars Elisabeth Shue, Kevin Bacon, Kim Dickens, Greg Grunberg, and Josh Brolin as a team of scientists trying to perfect the formula for an invisibility serum for the military. Initially, the only remaining snag is reversing the invisibility effect, but when Dr. Sebastian Caine (Bacon) discovers the key, the team eagerly anticipates gaining clearance for human trials.

Caine, however, has other ideas. Concealing their success from the military oversight committee, Caine uses himself as a test subject for the formula... but discovers the antidote doesn't work on humans. Already unstable from the start, Caine's sanity starts to fray further as the team struggles to find a cure for his invisibility, until it becomes clear that their invisible test subject is turning sociopathic...

The direct-to-video sequel, Hollow Man 2, was released in 2006 and starred Christian Slater.

Not to be mistaken with John Dickson Carr's Dr. Gideon Fell novel The Hollow Man, also known as Three Coffins, or with Dan Simmons' novel also called The Hollow Man. Or the T. S. Eliot poem "The Hollow Men".