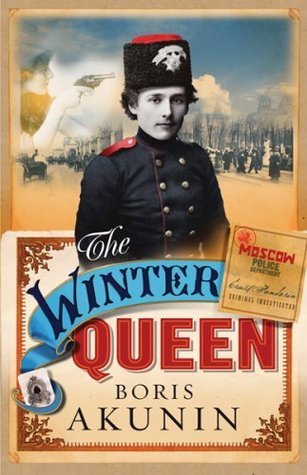 The Winter Queen (Russian: Азазель, "Azazel") is a 1998 Russian mystery novel by author Boris Akunin. It was the first novel in his Erast Fandorin series, which became hugely popular in Russia and around the world.

The novel is set in Moscow in 1876. A handsome young student, Pyotr Kokorin, pulls out a gun and shoots himself in broad daylight right in front of a beautiful young woman, Elizaveta von Evert-Kolokoltseva. The case, which appears to be an open-and-shut suicide, is assigned to 20-year-old rookie cop Erast Fandorin. Fandorin discovers that Kokorin was playing Russian roulette with another student, Akhtyrtsev. Fandorin starts tailing Akhtyrtsev, and follows him to the apartment of a dark, mysterious young woman, Amalia Bezhetskaya. Akhyrtsev spots Fandorin's tail, and invites him out for drinks....but then there's a murder. Fandorin narrowly escapes being murdered as well, and winds up stumbling on to a dark, murderous conspiracy involving a secret society called "Azazel", one with connections deep within the Tsarist government.

The first of fifteen novels in the wildly popular (in Russia, at least) Fandorin series, which took the character from 1876 to 1919. A Russian television series adaptation of The Winter Queen was produced in 2002. An English-language adaptation of this novel, to be directed by Paul Verhoeven who is an expert on Femme Fatale stories, languished in Development Hell for years and years, and does not appear to be forthcoming.