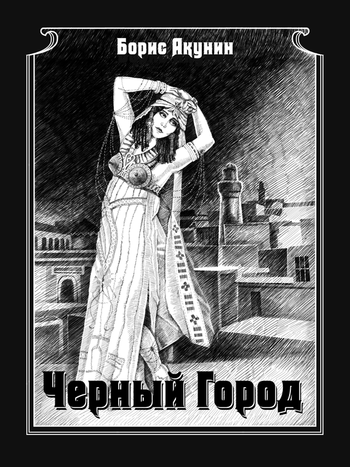 Black City is a 2012 novel from Russia by Boris Akunin. It is the 13th novel in the Erast Fandorin detective series.

June, 1914. Three years have passed since the events of previous Fandorin novel All the World's a Stage; Fandorin is now 58 years old. He is in Yalta for a minor errand when he is approached in panic by General Lombadze, the governor. It seems that Tsar Nicholas II is vacationing at his Yalta estate, and a Bolshevik assassin code-named "Odysseus" is in the city, and Odysseus is known to have a sniper rifle. Fandorin and Col. Spiridonov, the commander of the royal bodyguard, go to scout out where they think the sniper's nest might be—and Spiridonov is shot through the head. Fandorin finds a note which indicates that Spiridonov was the actual target.

The trail of Odysseus soon grows cold however, and with absolutely nothing to go on Fandorin packs it up and goes home. Soon, however, a lucky break causes Fandorin to realize that Odysseus has left for Baku in the Transcaucasus, and specifically the "black city" of oil fields outside of Baku. Fandorin and his loyal sidekick Masa set out for Baku immediately.

Complications arise after Fandorin's arrival in the city. First, his estranged wife Eliza is also in town; their marriage quickly went south after a whirlwind romance that took place in All the World's a Stage. Second, someone knows that Fandorin has arrived in Baku, and that someone is trying very hard to kill him. Third, there's another woman in town, a rich oil widow Saadat, who takes a fancy to Fandorin. Fourth, in the background, there's the small matter of the heir to the throne of Austria-Hungary having been assassinated in Sarajevo.