Literature / All the World's a Stage 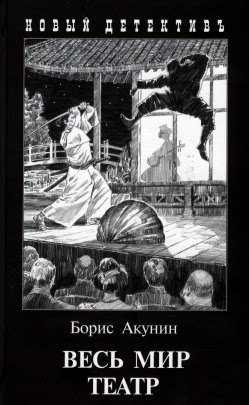 All the World's a Stage is a 2009 Russian mystery novel by Boris Akunin.

It is the 12th novel in the Erast Fandorin mystery series. The book finds Fandorin back in Moscow in 1911, now 55 years old, having a Hollywood Midlife Crisis. He is badgered into investigating what seems like a trivial case regarding a nervous, jittery actress from the Noah's Ark theatrical troupe. The case becomes a lot less trivial when someone tries to murder the actress via a snake hidden in a bouquet of flowers, and less trivial still when her male co-star in the troupe is also murdered. The actress, Eliza Altairsky-Lointaine, suspects her estranged and maniacally jealous second husband, Iskander.

Fandorin is intrigued by the case but also motivated by more personal reasons. Eliza the actress bears an eerie resemblance to his late wife, also named Eliza, who was killed 35 years before (way back in Fandorin #1, The Winter Queen). Fandorin realizes that he is falling in love, and must struggle with his desire for an actress half his age while also struggling to stay focused on the case and catch the killer.

The English translation of All the World's a Stage was released in 2017, six years after the previous translation, The Diamond Chariot (Fandorin #10). Fandorin #11, short story Jade Rosary Beads, was skipped.