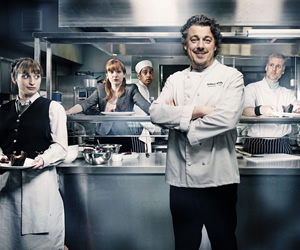 Whites is a low-key British comedy show set in the kitchen of a country house hotel.

Starring Alan Davies (sporting new facial hair) as an thinly-veiled parody of Marco Pierre White, the show aired in 2010 for one series. It was cancelled by The BBC because of its high cost of production.