Series / We Are Lady Parts 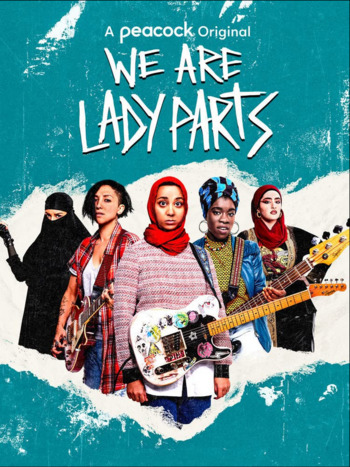 "Lady Parts. That was their band name, concocting a confused mix of hash anthems and sour girl power."
"Who would have thought that our orbits were soon to collide? Like a freight train careering towards a cute, unsuspecting lamb, who innocently trotted onto the tracks in search of, I don't know, snacks? I'm the lamb, by the way. What you have to understand is I'd never met girls like this before."
— Amina
Advertisement:

We Are Lady Parts is a Channel 4 Sitcom that premiered in 2021. The show is available as a Peacock original in the US.

Lady Parts is an all-female Muslim punk band trying to make it big in London. It is comprised of earthy cartoonist/bassist Bisma (Faith Omole), surly drummer Ayesha (Juliette Motamed), rebellious lead singer Saira (Sarah Kameela Impey), and enigmatic band manager Momtaz (Lucie Shorthouse). Saira, the leader, feels that they're missing something and starts searching for a lead guitarist to fill out their sound. Through this, they cross paths with Amina (Anjana Vasan), a PhD candidate with a deep love of music, and manage to recruit her. Faced with a social circle that views music — especially punk music — as haram, Amina must now juggle her commitment to the band, her crippling stage fright, and her quest for a husband.