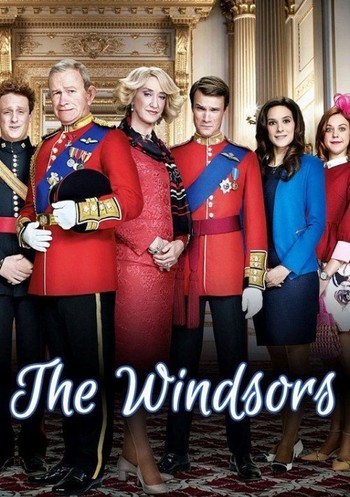 The Windsors is a satirical soap opera airing on Channel Four that revolves around a very fictionalized version of The British Royal Family.

Prince Charles (Harry Enfield) is impatiently waiting for his mother to die so that he can finally get a chance to be king. Camilla (Haydn Gwynne), meanwhile, is scheming to find ways to become the true ruler of the British Isles. William (Hugh Skinner) and Kate (Louise Ford), on the other hand, just want to live semi-normal lives without the pressure of being royalty. Harry (Richard Goulding, Tom Durant-Pritchard), an illiterate fool, is carrying on an affair with Pippa (Morgana Robinson), who is trying to manipulate everyone into supporting her lavish lifestyle.

The programme is notable in that everyone is considered fair game to be satirized... except the Queen and the late Princess Diana.

This programme provides examples of the following: