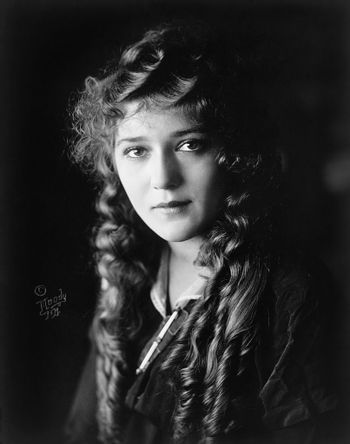 America's (Canadian) Sweetheart.
"It would have been more logical if silent pictures had grown out of the talkies instead of the other way around."
Advertisement:

Mary Pickford (born Gladys Louise Smith; April 8, 1892 – May 29, 1979) was the biggest movie star of her day, the trope maker for Dawson Casting and The Ingenue on the screen, one of the founders of United Artists, and "America's Sweetheart"... even though she was Canadian.

Pickford was born Gladys Smith in Toronto. By the time she was seven she was working on the stage as a child actor, and by 15 she was appearing on Broadway. This brought her to the attention of the cinema's first great director, D. W. Griffith, who signed her to a contract in 1910. Pickford quickly became very popular, and by 1914 and Tess of the Storm Country, she was famous enough that only her good friend and future business partner Charlie Chaplin could claim to be as big a star as she was.

Pickford played a variety of roles in her early years, but by the time she became a big star she was playing mostly innocent girls, spunky teenagers, or wide-eyed ingenues. She often was used for Dawson Casting parts, like in The Poor Little Rich Girl, when she played an 11-year-old child at the age of 24. In Little Lord Fauntleroy (1921) she played dual roles, simultaneously Dawson Casting as 10-year-old Cedric Errol and Playing Gertrude as Cedric's mother.

Determined to take control of her own career, Pickford joined her friends and colleagues Chaplin, Griffith, and Douglas Fairbanks to found United Artists in 1919. At the same time she was falling in love with Fairbanks, despite the fact that both of them were married; they divorced their respective spouses and married each other in 1920, becoming the first Hollywood power couple and the Ur-Example of the Portmanteau Couple Name—or rather, their house (dubbed "Pickfair

Though Pickford hated talking pictures (see the quote above), she still tried to make the transition. In 1930, after relentlessly campaigning, she won the first Academy Award for Best Actress in a talking film, for Coquette. She also did an adaptation of The Taming of the Shrew with Fairbanks, the only film they ever starred in together. Additionally, she cut off her world-famous long, luxuriant curls, adopting a short bob in order to project a more grown-up image as she approached 40 years old. It didn't work, and her acting career petered out in 1934. She would still be the most important woman in Hollywood for another 20 years, however, due to her role as co-owner with Chaplin of United Artists. She finally sold her share of the business in 1956, the last of the original owners to do so (Chaplin, in exile in Europe, had sold his share the previous year). In her later years, Pickford lived a very Norma Desmond-ish existence at Pickfair, drinking heavily and hardly ever seeing anyone, not even showing up when she received an honorary Academy Award in 1976 (she did allow a film crew to give her the award at her house).

Pickford died in 1979, survived by her third husband, Charles "Buddy" Rogers, and their two adopted children. Pickfair would remain vacant for the entirety of The '80s, after which Pia Zadora and her then-husband bought the estate and demolished it in 1990, claiming that it had been infested with termites (though many years later Zadora acknowledged this to be false).