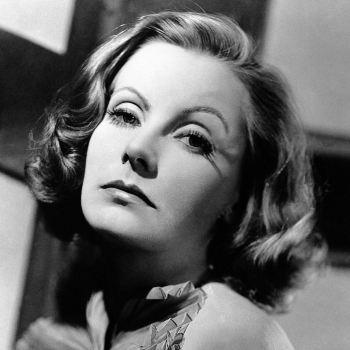 "I want to be alone."
— Garbo in Grand Hotel
Advertisement:

Greta Garbo (born Greta Lovisa Gustafsson; September 18, 1905 – April 15, 1990) was a Swedish actress, and one of Hollywood's most famous sex symbols during the late silent era, The Pre-Code Era and the early years of The Golden Age of Hollywood.

She was born in Stockholm, Sweden, the third and last child of a poor day laborer and his wife. Her first acting job was in an advertisement when she was fifteen years old. After going to drama school, she got her first big break when she landed the female lead in Swedish film The Saga of Gösta Berling. She came to the attention of MGM head Louis B. Mayer, who was enchanted, signed her to a film contract, and brought her to America.

Garbo spoke no English when she came to Hollywood but in the silent movie era this didn't pose a problem. She became an instant star — in her second film for MGM she got top billing. Her European sensuality was a revelation to American film audiences. Her career, however, was threatened by talking pictures, which sent several other European actors back home. MGM delayed her talking debut as long as they could; the last silent picture MGM ever made, The Kiss (1929), was a Garbo vehicle. Her first talking feature, Anna Christie, was marketed with the tagline "GARBO TALKS!" It was a smash hit, and Garbo continued to be hugely popular throughout The '30s, playing the same kinds of roles she had in the silent era, as femme fatales or tragic lovers. Her Playing Against Type romatic comedy role in Ninotchka (1939) was another huge success, but she only made one more film. With the attack on Peal Harbor and the American entry into World War II, Garbo officially announced that she was going to go on a indefinite hiatus from Hollywood, at least until the war was over. Various projects were proposed throughout The '40s but nothing came to fruition and Garbo eventually decided to extend her hiatus into entirely retiring from acting.

For nearly a half-century, she would gain a reputation as a recluse, but in fact she had an active social life and plenty of friends. When she was a huge movie star she had avoided the media, virtually never giving interviews or showing up for award ceremonies, and in retirement she simply continued to not talk to the press. She died of pneumonia and kidney failure in 1990.

According to available evidence, Garbo was bisexual. She had some high-profile relationships with men during her life, and clandestine same-sex ones. Mercedes de Acosta, a former lover (and open lesbian), hinted at her having a relationship with Garbo (among many other women) in a controversial biography, which caused Garbo to end their friendship. She may have had a relationship with actress Lilyan Tashman. Actress Louise Brooks said the two were briefly involved too. Garbo's estate, which controls her existing letters, released some letters of hers written to fellow Swedish actress Mimi Pollak suggesting romantic feelings for her, though many more of them have been held back.

Tropes about her career: