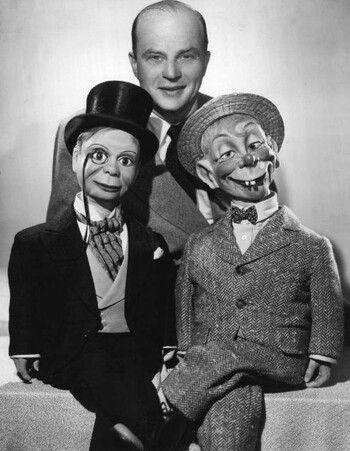 Edgar John Bergen (February 16, 1903 – September 30, 1978) was an American entertainer, and easily the most famous ventriloquist of the 20th century.

Self-taught from the age of 11, Bergen became a professional performer as a teenager, complete with commissioning a professional woodcarver to create his most famous character, Charlie McCarthy. He went on to become a star on Vaudeville and in film shorts before landing a regular engagement (on a recommendation from Noël Coward) at the upscale Manhattan restaurant the Rainbow Room. There, Bergen attracted the attention of a couple of NBC radio producers, who booked him an appearance on Rudy Vallée's popular variety program The Royal Gelatin Hour in 1936.

That appearance turned out so well that the following year Bergen became the headline act on The Chase & Sanborn Hour, which proved a top-rated series for the network. The admittedly unusual circumstance of a ventriloquist performing on the nonvisual medium of radio was easily countered by Bergen's flair for playing comic characters that could get away with the kind of moderately risqué gags which got other performers banned in that era. (In fact, the show was such a ratings powerhouse that Orson Welles's competing series on CBS, The Mercury Theatre on the Air, had to be sustained at network expense without sponsorship for months until its classic radio adaptation of "The War of the Worlds" led to the infamous mass panic that boosted its profile.) Bergen continued on the series (later cut to a half-hour and retitled The Chase & Sanborn Program) through 1948, then moved over to CBS and The Charlie McCarthy Show from 1949–56.

Bergen never had a sustained series again after The Charlie McCarthy Show ended, but continued to perform (with and without his dummies) in various guest spots on radio and television and in films. He even played Grandpa Walton in the Pilot Movie for The Waltons. Along the way, Bergen served as an inspiration for younger performers, such as the great puppeteer Jim Henson. When the The Muppets sang "Consider Yourself" to Bergen and Charlie during their guest appearance on The Muppet Show, the puppeteers meant every word of it. Sadly, that episode, and his subsequent cameo in The Muppet Movie, proved to be Bergen's final major media appearances before his death from kidney disease at the age of 75. The original Charlie McCarthy dummy resides at the Smithsonian Institution's National Museum of American History.

Bergen was married to model and actress Frances Westerman from 1945 until his death. They had two children, including actress Candice Bergen.