Film / Never Give a Sucker an Even Break 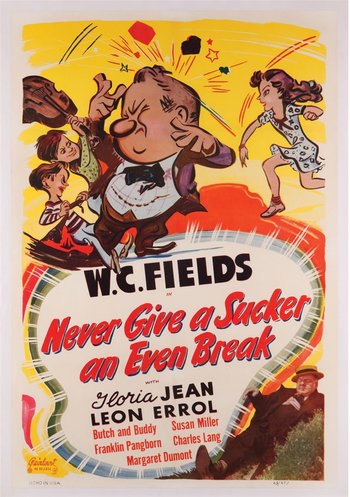 Never Give a Sucker an Even Break is a 1941 film directed by Edward Cline, starring W.C. Fields.

In it Fields plays...W.C. Fields, a star at Esoteric Studios. (He's introduced gazing at a billboard advertising himself in his previous film, The Bank Dick.) He has a niece, Gloria Jean (played by, yep, Gloria Jean), who is a budding musical star. Studio producer Franklin Pangborn (no prizes for guessing the actor's name) is trying to mold Gloria into a star, while growing increasingly exasperated at the eccentricities of Fields.

Fields has an appointment with Pangborn to go over his new script. The script that Fields reads for Pangborn is a completely crazy story in which his character falls out of the observation deck of an airplane—no, really—and falls thousands of feet onto an isolated Russian mountaintop mansion, where abides a gorgeous young blonde and her forbidding shrew of a mother. This story-within-a-story takes up a significant chunk of the film.

W.C. Fields's last starring role. He spent the last five years of his life in radio and making a few movie cameos before he died of alcoholism and cirrhosis in 1946.