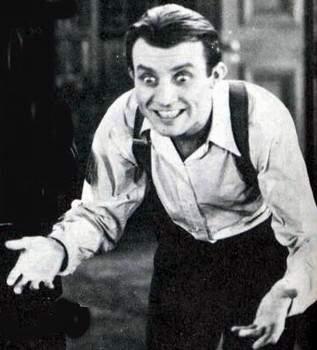 Look at his eyes! Why, the man's gone crazy!
"If God is good, I will be able to play comedy, in which I was featured on Broadway for eight seasons and in which no producer of motion pictures will give me a chance! And please God, may it be before I go screwy playing idiots, half-wits and lunatics on the talking screen!"
Advertisement:

Dwight Iliff Frye (February 22, 1899 – November 7, 1943) was an American actor remembered mostly for his appearances in the classic Universal Horror films Dracula (1931), Frankenstein (1931), and Bride of Frankenstein (1935), in which he codified both The Igor and The Renfield.

Frye had an extensive and varied stage career (including a part in the first American production of Six Characters in Search of an Author), gaining some positive attention for his roles on Broadway, but his hot eyes and earnest delivery were a bit overpowering on film in addition to his short stature. Hollywood cast him mostly as pathetic nutcases, but he kept trying to pursue a successful film career, and accepted any role he could to pay his bills. Frye's other roles were usually limited to very small, but memorable parts on B-list gangster movies (including the original 1931 version of The Maltese Falcon), usually as the villain's henchman. He appeared in short film Don't Talk as a saboteur at a war munitions plant.

A devout Christian Scientist, Frye refused to seek medical attention for his secret coronary condition, and his untimely death by heart attack came just days before he was supposed to begin filming a prominent "straight" role, as Woodrow Wilson's Secretary of War in Wilson. Whether or not that film could have finally launched him into stardom is up for debate.

He has gained a small cult following for his horror roles, and inspired an Alice Cooper song: "The Ballad of Dwight Fry [sic]."