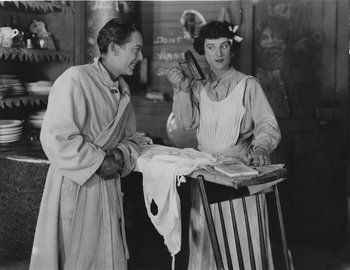 Exit Smiling is a 1926 comedy directed by Sam Taylor, starring Beatrice Lillie. Violet is a member of a theater troupe that criss-crosses the country performing a cheesy melodrama called "Flaming Women, Shattered Hearts". Violet is the servant of the troupe, left to do scut work like washing and ironing, allowed to play the maid in the play as she does in real life, but dreaming of playing a bigger part. One day Jimmy Marsh (Jack Pickford, Mary's brother), who had to leave his podunk town of East Farnham suddenly under mysterious circumstances, boards the train carrying Violet's troupe. Violet falls in love with Jimmy—and when the troupe happens to stop in East Farnham to perform their play, Violet gets a chance to prove her love for Jimmy.

Beatrice Lillie was a famous stage performer who made her feature film debut here. Reportedly she didn't care for movies, and only appeared in seven films over a period of fifty years. Sharp-eyed silent movie buffs will recognize Harry Myers, who played the Millionaire in City Lights, as Jesse Watson, the villain.