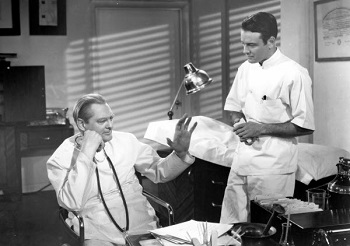 Dr. Kildare was a series of sixteen feature films from 1937 to 1947. They dealt with the life and struggles of an idealistic young doctor, James Kildare.

The character was first introduced in the short story "Internes Can't Take Money", written by Max Brand note The pen name of Frederick Schiller Faust and serialized in Cosmopolitan magazine in 1936. Paramount adapted the story into a feature film the following year, with Joel McCrea starring as Kildare. MGM, seeing further potential for the character where Paramount didn't, made a deal with Brand to produce a series of Kildare films adapted from additional magazine stories. The first of these, Young Dr. Kildare, was released in 1938, with Lew Ayres making his first of nine screen appearances in the title role. Also introduced was the character of Dr. Gillespie, Kildare's crotchety old mentor, played by Lionel Barrymore. Barrymore played Gillespie in every film for the rest of the series, fifteen in all, eventually becoming the star of the series.

Ayres, who was a pacifist, applied for conscientous objector status in 1942 to avoid combat duty in World War II. Ayres asked to serve as a medic and eventually did serve as a medic in combat in the Philippines, but the bad publicity led to his dismissal from the Kildare series. Six more films were made with Barrymore, as Gillespie, mentoring a new set of idealistic doctors.

The film series later spawned a radio drama, which reunited Ayres with Barrymore and ran in 1950 and 1951. Better remembered is the television adaptation, starring a young Richard Chamberlain as Dr. Kildare and Raymond Massey as Dr. Gillespie, which ran on NBC from 1961 to 1966 and was very popular.

Ur-Example of the Medical Drama, establishing several tropes, such as the idealistic young doctor with the crusty old doctor as a mentor, and the plot centering around a mysterious illness that the young doctor must diagnose.