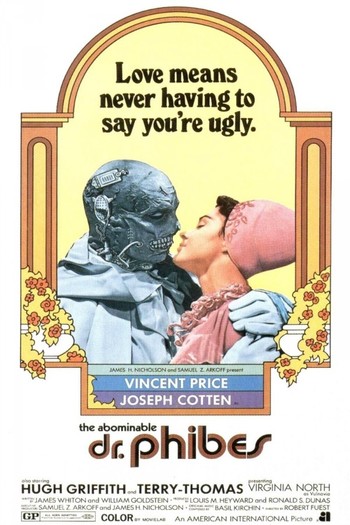 The Abominable Dr. Phibes is a deliberately campy 1971 British horror film directed by Robert Fuest, starring Vincent Price as the eponymous doctor and Joseph Cotten as his nemesis.

Four years ago, in 1921, Victoria Phibes died after only six minutes on the operating table. While rushing to her side, her husband Anton Phibes, a brilliant organist with expertise in theology, medicine and automation, crashed his car, and was thought to have been killed. In truth, the horrifically burned man had survived, only to learn of the death of his wife. In despair, Phibes went into seclusion, swearing vengeance upon those he perceived responsible for the death of his only love.

Now the year is 1925, and doctors have been perishing in disturbing and bizarre ways. At first, the only connections between them seem to be that the manner of their death is related in some way to one of the ten plagues of Egypt as outlined in the Old Testament, and that a silent, beautiful woman was nearby when they died. Yet there is one more connection between the doctors; a certain failed operation comes back to haunt them.

But if there were ten plagues, and only nine people operated on Victoria... then for whom is the Plague of Darkness intended?