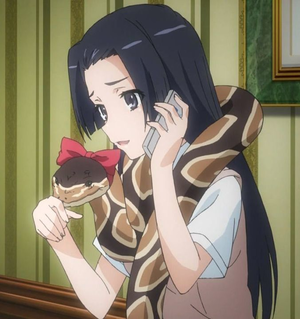 "You'll have to speak up, I'm wearing a snake."
"It is as if I have draped myself in a penis!"
— Jane, Nobody Scores!
Advertisement:

Basically wearing a snake (real or fake) as though it's a fashion accessory. This can often be seen with a Jungle Princess (especially if she has a Fur Bikini), The Chief's Daughter, or a Nubile Savage.

A Femme Fatale or Dragon Lady would use a venomous one, to show she has some connection with these creatures. Ms. Fanservice might use the snake in place of one or more items of clothing (because Snakes Are Sexy, y'know), taking the Theiss Titillation Theory to its limits.

Rock singers or Professional Wrestlers might also wear one, just to look badass. So do clowns for Rule of Funny purposes.

In Real Life, it's actually a practical way to carry some smaller snakes (as long as you do it right, or else they'll turn into Killer Rabbits). Larger snakes can be difficult to carry this way for long, as they are heavier than you might expect due to the high percentage of muscle and, in the case of constrictors, they will constrict if held in a way that makes them feel like they are about to fall. In fiction, it's meant to give a "wild and untamed" look to the wearer.

Not to be confused with the actual costume piece called a Feather Boa. Or Feathered Serpent.