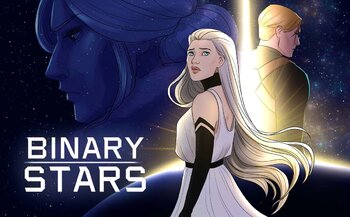 BINARY STARS n. A star system consisting of two stars orbiting a common center. To the naked eye, these systems seem to be a single point of light, but become visible through other means.
Binary Stars is a Webcomic written and illustrated by Caragh McErlean, also known as Ephermeres.
Advertisement:

Anastasia's life has always been safe and secure. But at night, her dreams show her a different life - one with war and conflict and tragedy. She tries her best to ignore it, but her universe is shaken when she's kidnapped by the man in her dreams and told she used to be someone else entirely. Now, she must race across galaxies to discover who she was and who she's meant to be.

You can read it online on its Webtoons site

Oliver: Are you even allowed to be running around the ship? Didn’t we kidnap you or something?
Anastasia:… Snitches get stitches?