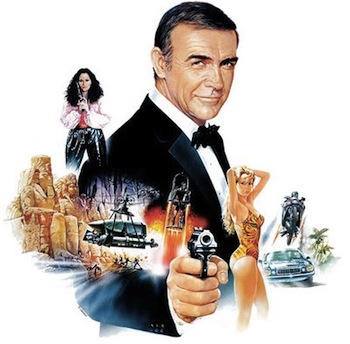 Sean Connery Is About to Shoot You.
Algernon: Good to see you, Mr. Bond. Things've been awfully dull 'round here. I hope we're going to see some gratuitous sex and violence in this one!
James Bond: I certainly hope so, too.
Advertisement:

The One With… Bond and the villain settling their differences... with a video game duel.

An "unofficial"note Not part of the long-running Eon Productions film series James Bond film released in 1983, starring Sean Connery and directed by Irvin Kershner (director of The Empire Strikes Back). It's a remake of Thunderball, with two nuclear warheads stolen by SPECTRE and used in a blackmail attempt against the nations of the world. Bond is sent to investigate the only lead, Domino Petachi (Kim Basinger in her Star-Making Role), sister of the pilot who performed the operation. The filmmakers intentionally decided to have Connery play an aging James Bond — though notably, Connery is actually younger than Roger Moore, who was still the current 007 in the official films at the time. Michel Legrand composed the soundtrack.

This movie was the result of an odd legal situation whereby Kevin McClory, who had co-written a movie script with Ian Fleming that would become the novel Thunderball, was allowed to retain the rights to that film's story and the characters who appeared in it. This included SPECTRE and Blofeld, who consequently were retired from the official Bond films after 1971's Diamonds Are Forever, not appearing again until 2015's Spectre when Eon Productions finally re-obtained the rights (it also forced Electronic Arts to rename SPECTRE to the comparatively cutesy-sounding OCTOPUS when they adapted From Russia with Love into a video game).

It was in direct competition with Eon's Octopussy, which came out the same year. McClory never followed up on this film to continue his goal of making his own James Bond franchise to rival the Eon series, due to the constant legal disputes with Albert R. Broccoli in doing so and having only the Thunderball novel to work with.

It's a Bond film, it's expected.

Example of:
Sealed with a Kiss

It's a Bond film, it's expected.