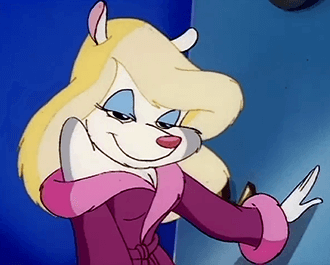 Sorry, it's not going to slide down any further.
Not that we're complaining.
The sexiness of an outfit is directly proportional to the perceived possibility that a vital piece of it might fall off.
Advertisement:

This basic theory underwrites Stripperiffic clothing, Impossibly Cool Clothes, and pretty much anything else you stick characters (usually female, but this can apply to men's clothing as well) into: what makes clothing sexy is the potential for a catastrophic Wardrobe Malfunction. The Trope Namer is William Ware Theiss, costume designer on Star Trek: The Original Series, who first codified the concept.

The allure of this trope is all in the tease — precarious as these outfits seem, they will never, ever fail to keep everything covered. (at least from the perspective of the viewer; other characters might be getting quite the eyeful). The TTT also takes advantage of an odd side effect: a particularly sexy outfit actually out-titillates frank nudity. Evidently, a woman who is not quite naked is more interesting than a woman who already is.

This trope is particularly common in Science Fiction and related genres, where exotic or futuristic landscapes (plus the Willing Suspension of Disbelief) make it seem plausible that these outfits could be everyday wear. However, on Will & Grace, Debra Messing occasionally wore outfits that would not be anatomically feasible for a better-endowed woman.

Though Theiss was a costume designer, according to Inside Star Trek: The Real Story by Herb Solow and Robert Justman, most of the costumes — following this theory — were actually somewhat more modest before being "improved" by Gene Roddenberry. According to the "Art of Star Trek" book, Theiss preferred to design costumes that only appeared to be in danger of slipping or coming off, through the use of strategically-placed sheer or skin tone fabric. He was further able to enhance the effect by the censorship rules of the time regarding what parts of the body could or could not be shown (the navel being the most well-known restriction). He found he could get surprising amounts of appeal from the carefully-arranged display of skin not generally considered erogenous.