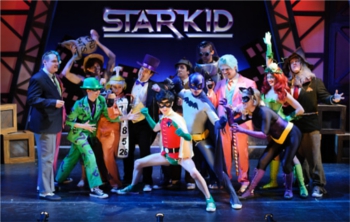 Holy Musical B@man! is a musical written and performed in 2012 by Team StarKid. It is an Affectionate Parody of Batman, The DCU, and comic book superheroes in general.

After witnessing the brutal murder of his parents, young born billionaire Bruce Wayne reacts the way any rational person would and dresses up like a giant bat to wage a one-man war on crime. But as it turns out, there is one big downside to being a lone Anti-Hero: it's pretty lonely.

Can a young orphaned acrobat named Dick Grayson fill the hole in Batman's heart shaped like his parents getting shot and murdered in an alleyway? And what of Superman, an annoying and all-powerful superhero from Metropolis who is secretly jealous of Batman's popularity?

Can be watched for free here

Has a fledgling character sheet here.