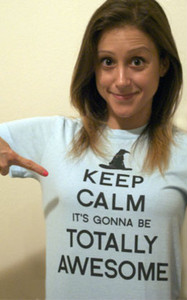 Lauren Lopez (born March 8, 1986 in Royal Oak, Michigan) is one of the members of the group known as Team Starkid.

She's been in every Team Starkid production to date except for Me and My Dick and Ani. She's the second-most prolific Starkid actor after Jaime Lyn Beatty. She was also in the "pre-Starkid" production Little White Lie, which, being a pre-Starkid production doesn't entirely count.