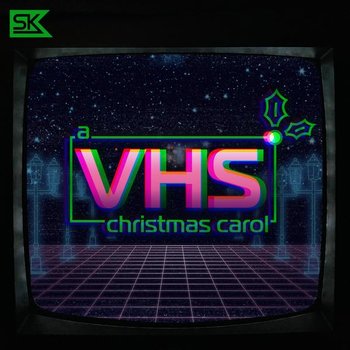 'Cause it's the story of
The meanest man there ever was
The rudest dude you ever knew
The crabbiest
Scumbaggiest
The grouchiest
The frowniest
The angriest hater
The crankiest neighbor
The greediest geezer
The cruelest creature
No one meaner than Ebenezer Scrooge!
Advertisement:

A VHS Christmas Carol is a short (45-minute) Web Video project created by Team Starkid for the 2020 holiday season during the COVID-19 Pandemic, as an experiment to see if they could do a fully produced musical project via Green Screen.

It's a Surreal Music Video adaptation of the classic Charles Dickens novella A Christmas Carol as a Concept Album from The '80s, with the actors (almost none of whom are physically in the same space) superimposed on various digital backgrounds in order to tell the story.

It's also a bit of a Reunion Show for Team Starkid, bringing back a bunch of actors from Starkid's "first generation" who appeared in A Very Potter Musical (along with a few others), who hadn't appeared in a Starkid show since the beginning of the Hatchetfield series when Starkid moved to LA in 2018.

A VHS Christmas Carol was broadcast for four livestreamed performances on the weekend of Dec. 11-13, 2020. The recorded digital ticket remained available here

until Jan. 1, 2021, and the soundtrack album will be available for purchase indefinitely. Note that there are currently no plans to make this show available on YouTube for free.