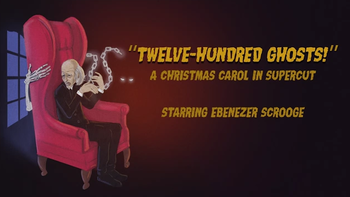 Once upon a time, there was a great author, who with a single story transformed a holiday. Along the way, other artists found inspiration in this story, creating their own versions of the work. Some were good. Some were bad. Some were complete trainwrecks. Recently, an idiot spent a year and a half collecting these versions. The goal? Create a new narrative using a small portion of each source to tell it. What is the story, you ask? I would guess you watch it every year...

Twelve Hundred Ghosts isn't just one adaptation of Charles Dickens' A Christmas Carol... it's over 400 of them. Using everything from straightforward adaptations of the work to parodies, whole plot references, and commercials, the result is 53 minutes of utter hilarity that still tells a comprehensible story.

Currently, Heath Waterman is working on an extended multi-part follow-up, A Christmas Carol Encyclopedia, covering the whole story. Part One

, covering Stave One and half of Stave Two was released in December of 2020, with the rest planned for Christmas 2021.

This video contains examples of: