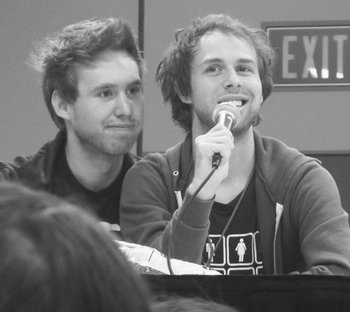 Sibling Team Matt and Nick Lang are the co-writers and co-directors behind many of the Team Starkid productions.

Nick has had a greater on-stage presence as an actor. He also handles much of the puppet work. He worked on soapnet.com and was a part of the Gossip Girl finger puppets

, which have reached Memetic Mutation in that fandom.

Tropes that apply to them include:

Works (all of the below are written by both brothers)