Theatre / Twisted: The Untold Story of a Royal Vizier 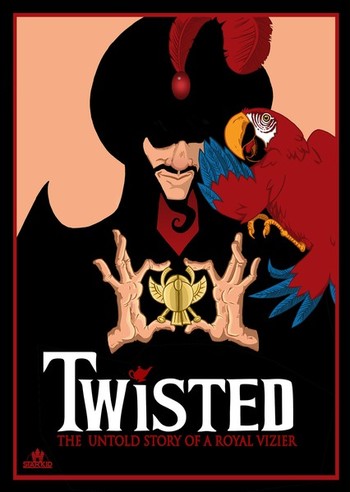 The seventh full-length musical by Team StarKid, Twisted gives Aladdin the Wicked treatment, exploring the true story of Jafar (or rather, "Ja'far"). Along the way, StarKid both thoroughly lampoons and pays its respects to the many, many tropes popularized by Disney.

Ja'far is a hardworking, honest politician in a magic kingdom that has fallen on hard times. Corruption is rampant on all levels, crime is up (thanks to the efforts of that thief Aladdin), and the kingdom is on the verge of bankruptcy. When the naive princess angers the prince of the Kingdom of Pik-zahr, Ja'far remembers a tale told to him by his deceased wife of an all-powerful Djinn, hidden in a common lamp. To save the kingdom from certain destruction, Ja'far must do everything he can to get his hands on that lamp, even when the road gets a little twisted, to ensure a happy ending for all.

"A Song Is A Dick In Sheep's Clothing"

"A Song Is A Dick In Sheep's Clothing"