Theatre / The Trail to Oregon! 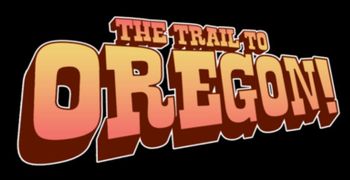 "We are gone to Oregon, it's the greatest family vacation!"
— Opening Number
Advertisement:

The Trail to Oregon! is a comedic musical parody of cult classic video game The Oregon Trail, performed by Team Starkid as its ninth stage production.

It tells the story of a dysfunctional family of settlers and the hardships they encounter as they attempt to travel down the Oregon trail.

Audience participation is a major component of this show, allowing the audience to name all the main characters, and even choose the family member to die at the end of the show.

The Trail To Oregon contains the following tropes: