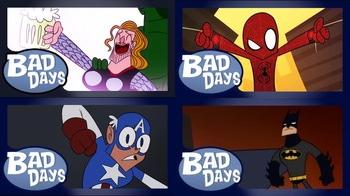 Bad Days is an animated series created by Junaid Chundrigar and Davor Bujakovic. The cartoons feature different fictional heroes and villains...on one of the worst days of their lives. There's almost no dialogue involved, just hilarious situations and Shout Outs galore.

The series started with one short, Disassembled

, depicting several little mishaps in the Marvel Universe. The short became a viral success, even appealing to former Marvel writer Stan Lee. He enlisted Junaid and Davor to make more cartoons for him to post on his World of Heroes

YouTube channel, later renamed MarvelousTV. The show also extended out to starring characters not owned by Marvel, and even characters who originated in media other than comic books.

As of season three, new cartoons appeared every other Saturday on the YouTube channel CineFix

, instead of World of Heroes. Junaid and Davor also released commentaries in between. Bad Days returned to MarvelousTV for its fourth season, produced without Junaid, Davor, or the late Stan.