Web Animation / Back To The Moon 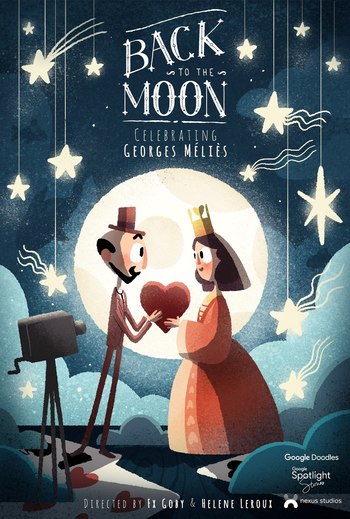 Back To The Moon is a two-minute CGI animated short co-produced by Google Spotlight Stories, Cinémathèque Française, and Nexus Studios as Google's first ever virtual reality Google doodle. Celebrating the life and work of legendary filmmaker and illusionist Georges Méliès, it was released on May 3, 2018, the 106th anniversary of the release of one of his greatest cinematic masterpieces, “À la conquête du pôle” ("The Conquest of the Pole") in 1912. The short stars caricatures of both Georges himself (in numerous roles) and his love interest (and real-life wife), Jehanne d’Alcy, partaking in a fantastical, 360-degree adventure of spectacle, love, and cinematic magic.

The full Google Doodle VR experience is available on mobile, Cardboard, or Daydream via the Google Spotlight Stories app

, and can also be viewed without a headset as a 360° video (here

) on the Google Spotlight Stories YouTube Channel. Google's article about how the film was made can be found here

Back To The Moon contains examples of: