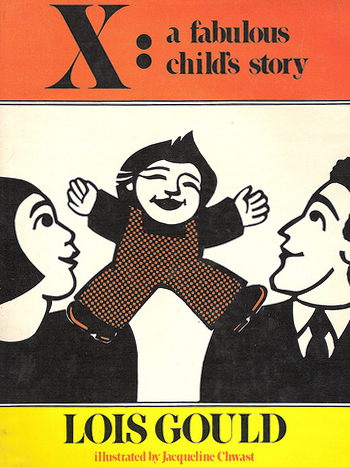 A tale that has aged xceptionally well, pronouns aside.
"Other children have to obey the silly boy/girl rules because their parents taught them to. Lucky X, you don't have to stick to the rules at all. All you have to do is be yourself. P.S. We're not saying it will be easy."
Advertisement:

X: A Fabulous Child’s Story is a 1972 Short Story written by feminist author Lois Gould for Ms Magazine, later published under Children's Literature in 1978. The story would later be adapted into an 11-minute animated short in 2016 under the title Baby X

The story is about a child named "X" who, as part of a scientific xperiment titled "Project Baby X", is born without a strict gender identity — whether or not X is "he" or "she" is kept top-secret by the team of scientists and xperts behind the project and X's adoptive parents, the Joneses. For the first few years of X's life, the Joneses raise their little X free of gender-specific xpectations and limitations, as per their Official Instruction Manual, but it's unfortunately very clear to them that society has no tolerance for a child who cannot conform to their norms, especially when X starts school.

This story provides xamples of the following tropes: