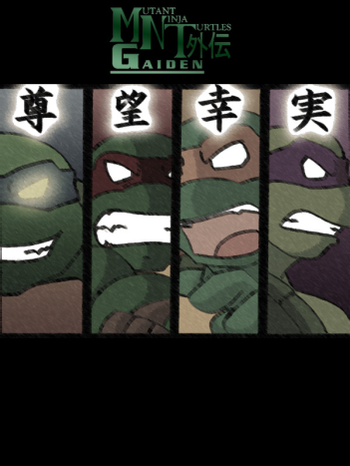 "Shellshock" takes on a whole new meaning.
"Always blaming other people when you screw up... You're quite irresponsible, Raphael... And yet, you keep competing with me to become the leader... That's just laughable! You're just a failure! An undisciplined and brainless piece of trash that fails in everything it does! Your very existence is a dishonour to our Sensei!"
— Leonardo to Raphael, prologue
Advertisement:

A Teenage Mutant Ninja Turtles fancomic with a Darker and Edgier story, in many ways closer to the original comics than the cartoons, started in 2004 by an aspiring artist known going by the name of Tigerfog. The entire comic can be found on Tigerfog's DeviantArt page

, or its own fan wiki

The story begins when the Teenage Mutant Ninja Turtles were indeed teenagers. Master Splinter receives a package from an unknown sender, but leaves it hidden as he teaches Leonardo an old technique. As this happens, the ever-curious Michelangelo recruits Raphael so they could find out what Splinter received. They both find an old, broken katana and, from then on, certain characters begin to act strangely out-of-character. The conclusion of the Prologue leaves the four brothers psychologically traumatized.

Cut to seventeen years later, when the Ninja Turtles are adults. A mysterious fifth turtle shows up on the news, causing the older Raphael and Donatello to resurface once more in an attempt to recruit them. However, the fifth turtle, whom Raphael names Renoir, knows nothing about how he became a turtle. All he remembers are his memories as a human named Augustus Amherst. Despite this, Raphael takes Renoir under his wing, making Renoir his student and establishing the set-up of the main story.