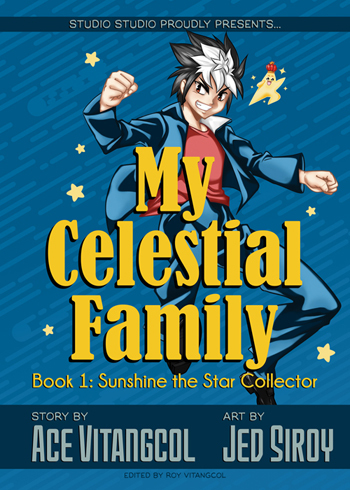 My Celestial Family is an Action-Comedy Manga. It is about a high school delinquent named Ray, whose "pure maiden's heart" attracts the attention of the Star Prince Sol. Ray is given the Star Bar, a device that allows him to become a Star Knight, a human who is able to fuse with stars to gain their celestial powers. As a Star Knight, Ray helps Sol save his siblings, who have been corrupted by dark matter and turned into Black Stars.

As Ray and Sol save each star, they join him on their quest to rescue their entire Celestial Family.

Written by Ace Vitangcol, illustrated by Jed Siroy, edited by Roy Vitangcol, and produced by Studio Studio and Alturia Hill Publishing, it is a Filipino comic drawn in a manga style.

My Celestial Family is currently in production, with the first book recently announced with the possibility of more books to come. Details regarding the comic can be found on the Love Is in the Bag Facebook page here

Two other series by the same authors are Love Is in the Bag, and Angel Crush. Unlike the previous two, My Celestial Family is not part of their shared universe.