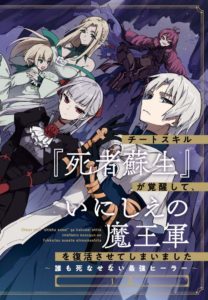 No one bothered to check and see if he truly died. Humanity didn't know that it is at this moment that their biggest mistake ever has been made.
Full Title: My Cheat Skill [Resurrection] revived me, And I ended up resurrecting The ancient demon lord’s army. ~The Strongest Healer that won’t let anyone die~

Alternate title: I Accidentally Resurrected the Demon King's Ancient Army When I Learned the "Resurrection" Op Skill ~The Strongest Healer Who Won't Let Anyone Die~,

S-ranked adventurer Licht served the kingdom of Resaga faithfully as an adventurer, taking on many dangerous missions with his supposed team-mates, Allen, José, and Shizuku, until one day, they decided they didn't need him any more. Rather than giving him a hearty send-off and a decent severance package, they led him into an ambush disguised as a ruins investigation, and sell him to the kingdom's executioners, who present an execution order from the king because someone outed his skill [Resurrection], thus triggering the king's paranoia and resulting in Licht's unjust execution.

Sadistic and lazy, the executioner makes a sick little game out of the execution itself, demanding gratitude that Licht wasn't given an excruciating and long ordeal, but rather a quick and "painless" death. Licht is summarily stabbed in the chest and thrown off a cliff, but the executioner never bothered to make sure Licht actually died. Surprise! Licht's skill triggered automatically, reviving him back to perfect health.

Desperate and vengeful, Licht flees to a rumored dormant dungeon, finds it, and uses his skill to revive the occupants to find himself face to face with the demon lord Aria and her most trusted generals. Now with a righteous grudge, they join hands, resurrect and recruit the necromancer Dorothy who has a similar backstory, and make true the king's greatest fears.