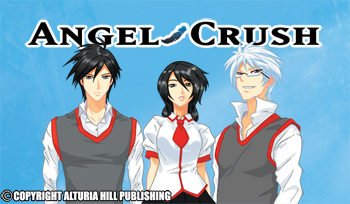 Left to Right: Gale, Faye Willow, Daniel Thace Peregrine, AKA Cupid
Angel Crush is a fantasy adventure comedy Manga about the daily life of a girl named Faye Willow and Gale, an angel who crashed through her roof and into her life. Suddenly she learns that she is tasked by Heaven to teach and guide Gale how to be a normal person so he can achieve his potential to be able to succeed in his secret, unknown mission.
Advertisement:

To help keep them safe from outside forces, another angel is sent down to protect them: the rebellious and blunt Cupid. So much for a simple life.

Angel Crush explores themes of friendship, bonding, growth, and getting along with others. There is also a pervading theme of moving on from the past, as most of the characters have endured something sad in their lives that continue to affect them in the present.

Written by Ace Vitangcol, illustrated by Jed Siroy, Ferdenee Mempin, and Mikel Bondoc, with co-writers Ryan Cordova and Glenn Que, and produced by Studio Studio and Alturia Hill Publishing, it is a Filipino comic drawn in a manga style that is safe for young readers.

Angel Crush is currently in production, with five volumes already published and a sixth volume on the way. The comic's Facebook page can be found here