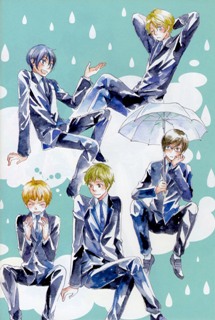 It was the first day of school in the prestigious all-boys' Amagai Academy, and five first-year students — Hazuki Yamanoi, Touma Kisaragi, Madoka Sakonji, Junta Goromaru, and Yuusuke Maki — were all individually caught by a violent thunderstorm after school and decided to head up to the deserted top level of their school building for various reasons. As they converged in the top level, lightning struck the building and they suddenly found themselves transformed into girls! Shocked by the ordeal, they fled from the building and into the thickly wooded school grounds where they accidentally stumbled upon Haruto, the enigmatic dormitory supervisor, who decided to help them when he heard about their plight. But how should he help them? Will they ever change back to normal? What will happen to their school life?

Also titled Clear Up After Rain, this ongoing Gender Bender manga by Bikke is unusual in its premise by having five protagonists, each with varying personalities. This however does not stop them from being well-developed characters and all of them contribute toward a plot that interweaves comedy with issues on gender, friendships and relationships in general.