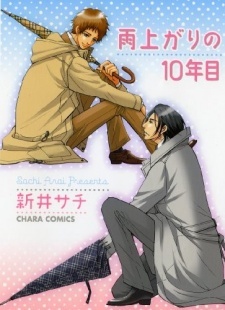 When Love takes decade to understand
Ameagari no 10 nenme (Ten Years After the Rainfall) is a Yaoi Manga by Sachi Arai.
Advertisement:

Even after ten years have passed, Kouji Hanajima is still bound by his first love toward his friend Shoichi Kurose. When fate brought them together again, Hanajima has turned into cold-hearted and annoying person even though he(Hanajima) was the one who was rejected after the confession. And so their old flame begins to spark once more.

Also contain two oneshot Amai Sensei dealing with a love story between a professor and a student, and Boku no Natsu dealing with the third wheel Ayumu "Ayu" and his relationship with his two best friends, Koichi and Rie.