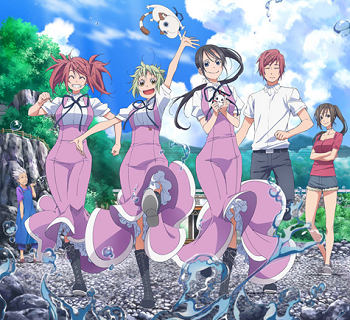 "FUN for ALL. ALL for FUN."
Advertisement:

Hikari Kohinata is a cheerful 15 year-old girl who lives near the ocean and she spends much of her time diving as a result. On her first day of high school, she meets a teacher who also likes scuba diving. There's also a 16 year-old classmate, Futaba Ooki, who gets dragged along in Hikari's maelstrom as soon as they meet at school. Most of the manga so far details the relationship between the two girls, which quickly seems to move into Pseudo-Romantic Friendship territory.

Amanchu! is perhaps most notable as a creation of ARIA's Kozue Amano, running in Monthly Comic Blade from 2008 to 2021. Rather than being located on Neo-Venezia, however, it takes place in the modern-day Japanese town of Ito in Shizuoka Prefecture, although Amano also put in some well-known landmarks from other places in that region. It focuses on scuba diving and high school life. The manga itself, Hikari in particular, uses a lot of diving jargon even when not diving.

Received a 2016 anime adaptation produced by JC Staff, with a second season released in 2018.