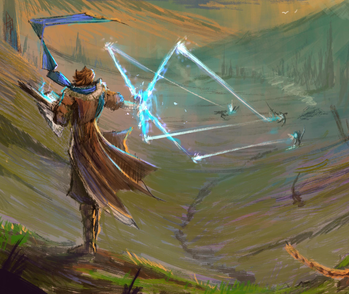 . Used with permission.
"Starting the confrontation alone, he singlehandedly charged the mutant and orcs with nothing but his bare hands. As soon as they were within magic missile's range he unleashed a flurry of magical energy missiles. In the space of a few seconds, dozens of magic missiles flew from his fingertips: cutting down waves of orcs with incredible speed."
— "Magic Missile Stormer (3.5e Optimized Character Build),"

Squishy Wizards enjoy Spam Attacks too. For many spellcasters, their version is likely to be manifested in a Magic Missile Storm. This attack sends out a swarm of magical projectiles, likely in the form of glowing energy orbs or pointed arrow-like shapes. These projectiles will probably leave colored trails in the air as they move, spreading out to weave and turn through the air before converging and impacting the opponent in rapid succession, bombarding them with arcane fury.

A subtrope of Homing Projectile.

Compare Beam Spam, Roboteching and Macross Missile Massacre, as an example could be this trope and one of them as well. Not to be confused with Projectile Spell, which refers to spells behaving like line-of-sight projectiles that can be dodged.