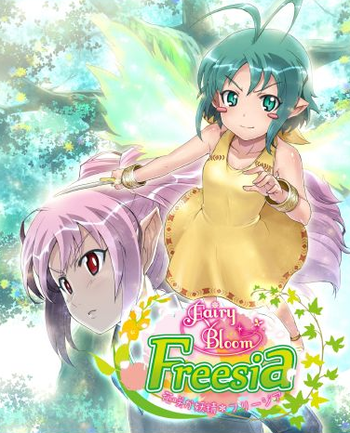 Fairy Bloom Freesia is a Stylish Action game developed by Edelweiss, the makers of ETHER VAPOR, and was released on August 15, 2011 during Comiket 80. It is the sequel to Fairy Bloom, but unlike its predecessor, Fairy Bloom Freesia has more of a plot behind it. The story of this game revolves around a guardian fairy named Freesia who must protect the Lita Forest from invading monsters and humans. The gameplay combines the Beat 'em Up action of the original game while combining RPG Elements that allows Freesia to gain new abilities, attack skills, increase her stats and more. It also features its own in-game Achievement System along with HD resolutions and widescreen support. Edelweiss also released a two-disc original soundtrack, one for Fairy Bloom Freesia and the other for ETHER VAPOR Remaster.

This games features examples of: