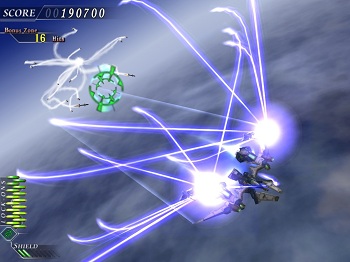 ETHER VAPOR is a cinematic Shoot 'Em Up created by Japanese doujin soft developers Edelweiss released for Windows PC on August 13th, 2007. Advertised as a "2.75D" shmup, it is known for its rapidly changing gameplay, shifting from a vertical shooter, to a horizontal shooter, and even a rail shooter.

Caldea, a small fictional nation, was able to successfully discover Artificial Intelligence. This was found during a project when several of the nation's researchers created an A.I. computer used to solve Caldea's problems. Instead of being controlled manually, it was given an artificial personality through endless enormous databases. Although the computer went insane, it was used greatly for the Caldean military, where it successfully waged war on other nations with new weapons and technology. In reponse, several other nations and rebel forces coupled together to create the nation of Lydia. Despite their union against Caldea however, they were already fighting a losing war.

A young boy named Luca Earlgrey then began a personal fight against the powerful nation. With a ship never seen before called the Ex-tio, Luca is determined to crush the Caldean forces and destroy the computer now commonly known as DECIDER. On his fight to end the war and free the nation's dependence on the sadistic super-computer, he encounters both allies and enemies, including a young pilot of the Lydian air force named Sana, a cyborg mech-using scientist named Daniel, and new heavily-armed version of DECIDER known as the APITEX.

In 2011, it got an Updated Re-release known as ETHER VAPOR Remaster, with updated visuals and high-resolution support* (however it is still a 4:3 game with resolutions supported only up to 1600x1200; Fairy Bloom Freesia supports 16:9 and 16:10 resolutions), 3D display support, improved sound quality, a third version of Luca's Ex-tio, online leaderboards, easier unlockable contents, and an optional "Remaster Mode" that allows the game to be played with arcade-styled transitions without the story dialogue. Edelweiss also have released a two-disc soundtrack of ETHER VAPOR Remaster and Fairy Bloom Freesia.

Nyu Media has released an English version of the game's re-release on June 29th, 2012 for $7.99. Nyu Media's English webpage for the game (and where it can be purchased) can be found here

. It is also released on DESURA on September 7th, 2012, and then later on Steam on September 27th, 2012. Nyu Media also released the original soundtracks of ETHER VAPOR Remaster and Fairy Bloom Freesia digitally though their Bandcamp here