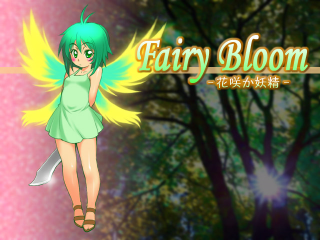 Fairy Bloom is a doujin Beat 'em Up game developed for Windows PC by Edelweiss, and one of the first games released by the circle, and the first in the Fairy Bloom series.
Advertisement:

In Fairy Bloom you play as a flower fairy who must protect a blossoming flower from monsters that wish to do harm to the precious plant. Don't be deceived by the fairy's cute looks, she kicks far more ass than you think. Armed with a blade in hand, she will punch, kick, slice and dice anything trying to prevent this flower from blooming. The game was released on December 26th, 2005 as a retail game, but later the game became freeware and it can be downloaded here

The game was later followed up by a Stylish Action sequel with Fairy Bloom Freesia released in August 15, 2011 during Comiket 80, and was later localized by Nyu Media in 2012 through Steam and DESURA.

A remake of the original Fairy Bloom, entitled Fairy Bloom Ultra Encore, has being developed with the Unreal Engine 4. A demo of the remake was released during the 86th Summer Comiket and its trailer can be found here

. The game was available from Playism's site through a "pay what you want" model at a minimum of $0.99 with the game's source code going for $9.99; as of May 2021, the game is no longer available since the closure of the site's site, and instead has been moved to booth.pm.

These games features examples of: