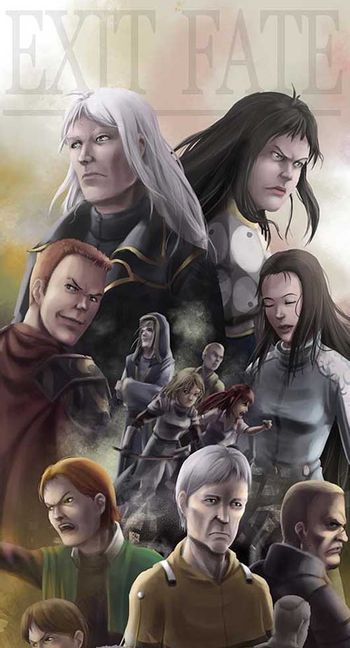 Exit Fate is a freeware RPG similar to Suikoden, wherein you can recruit seventy-five playable characters. It also bears some similarity to Chrono Cross.note You can even unlock the menu sets of these two games.

The story centers on a man named Daniel, a colonel in the Kirgard Army. Kirgard and Zelmony are two nations at war, fights breaking out every 20 years or so. On the eve of the invasion of Helman Island, Daniel blacks out and wakes up in the middle of the woods, only to be branded a traitor.

Seeing no other alternative, he joins the other side in order to try and bring a swift end to the war. He is then put in charge of a special unit to defend Zelmony, whereupon... erm...

Okay, fine. The plot begins as one big Cliché Storm. Luckily, the plot thickens over time (culminating in a few legitimate twists toward the end), and it makes up for the initial unoriginality in depth, beauty, a colorful cast of characters and motives being used in unexpected ways.

Never confuse the protagonist, Daniel Vinyard, with the similarly-named character (Daniel Vineyard) of American History X. This work is also not about exiting Fate.

While that particular example was legit, General Keyser is so suspicious of everything (on the principle that if he was doing it, it would definitely be a trap) that he's very hard to trick.