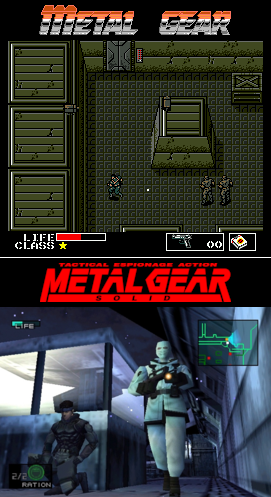 Oh, so that's why it's called "Metal Gear Solid".
"People are bored of 2D worlds...this is the age of 3D!"
— King Tezro of Dotnia, 3D Dot Game Heroes
Advertisement:

This is when a Video Game series makes the leap from sprite graphics to Polygonal Graphics.

Usually comes in two forms: Total Upgrade, and Presentation Upgrade. The former completely changes the gameplay to accommodate the third dimension, while the latter changes just the graphics, while leaving the gameplay the same, usually because the gameplay works in both.

The largest portion of video game franchises made the leap during The Fifth Generation of Console Video Games.

The Super-Trope to Polygon Ceiling (when the upgrade is poorly received).